The Nebelung is a medium-sized cat with a long body.

They tend to weigh in at 7 to 15 pounds with females generally being smaller than males. That said, some Nebelungs may fall outside of that range.

The Nebelung has a reputation as a gentle, quiet cat, somewhat shy, but don’t get the wrong idea. This cat may have a reserved nature, but they love to play--being especially fond of retrieving--and enjoy jumping or climbing to high places where they can study people and situations at their leisure before making up their mind about whether they want to get involved.

Guests will not receive this cat's immediate attention and may never see them unless they decide the humans are worthy of their notice, but toward family members, especially their favored person, the Nebelung is ever loyal, following them through the house.

The Nebelung is a sensitive cat who doesn’t like to be ignored. Lack of attention can cause them to become anxious or fearful.

While the Nebelung loves your company, they're capable of entertaining themselves during the day while you are at work. Unlike some active, intelligent breeds, they're not destructive but move through the house with grace.

This is a cat who does best in a quiet, stable environment. They don’t like change like most cats.

If you take the time to develop a relationship with a Nebelung, your reward will be a deep bond with this loving cat.

Both pedigreed cats and mixed-breed cats have varying incidences of health problems that may be genetic in nature. The Nebelung is generally healthy.

An owner’s main concern will probably be this cat's hearty appetite, which can turn them from sleek to stout in no time.

The Nebelung’s long, dense coat is easy to maintain. You can of course combe the fur to remove dead hair and distribute skin oils. The coat does not need to be trimmed.

Keep the Nebelung’s litter box spotlessly clean. They are very particular about bathroom hygiene, and a clean litter box will help to keep their coat clean, as well.

It’s a good idea to keep a Nebelung as an indoor-only cat. Nebelungs who go outdoors run the risk of being stolen by someone who would like to have such a beautiful cat or run over by a car. A well fenced outside area would be the nice to have, but lots of Nebelung are inside cats only.

The Nebelung looks much like the elegant-yet-muscular Russian Blue, but with a thick, shimmering, medium-length coat. Their general appearance is that of a long, sturdy, well-muscled cat.

The International Cat Association breed standard for the Nebelung calls for them to have a modified wedge-shaped head that is more pointed than rounded, although his long hair may give the head a rounded look. Large ears are wide at the base with pointed tips, and rich, deep-green eyes have a slightly oval shape and are set wide apart.

Kittens may have yellowish-green eyes, but by the time they are two years old they should have developed into the vivid green of maturity. The nose pad is charcoal gray.

A long, slender neck sometimes looks shorter than it actually is because of the Nebelung’s dense fur. The body is what’s called semi-foreign, meaning it is moderate in shape, falling somewhere between the short, compact body of breeds such as Persians and the sleek angles of Oriental breeds such as the Siamese. It is athletic but not bulky, with a medium-boned body that is well proportioned.

Supporting the body are long, medium-boned legs set on medium-size, well-rounded oval paws with generous tufting between the toes. The Nebelung looks as if they're walking on the balls of their feet. Their tail is at least as long as their body from shoulder blades to rear end, covered in fur that is longer than the body hair.

The Nebelung stands out for their luxurious coat and striking color. A medium-length double coat covers the body, increasing in length from the shoulder to the tail.

Males have a distinct neck ruff, but females are not as well endowed. Behind the ears is feathering in a lighter shade of blue. Fur covering the back of the upper thighs gives the Nebelung the appearance of wearing pantaloons. The outer coat is fine and silky, topping an undercoat that is soft and downy.

The coat typically does not develop fully until the cat is two years old. It is thicker, longer and softer in winter.

To the uninformed, the Nebelung might look gray, but in cat show terms, they are blue all the way to the roots. It’s ideal if the fur is silver-tipped, which makes the coat seem to glisten, but often silver tipping is noticeable only on the head and shoulders.

Some Nebelung kittens are born with “ghost stripes,” a reminder of the tabby gene that all cats carry, even if it isn’t expressed in their coat, but these generally fade, leaving the cat with the solid blue coat of maturity.

Children And Other Pets

Nebelungs have a tolerant nature toward children who treat them kindly and respectfully, but they can be wary of younger children who pet them clumsily. Always supervise very young children when they want to pet the cat.

The Nebelung is accepting of other animals, including dogs, as long as they aren’t chased or menaced by them. Introduce pets slowly and in controlled circumstances to ensure that they learn to get along together. 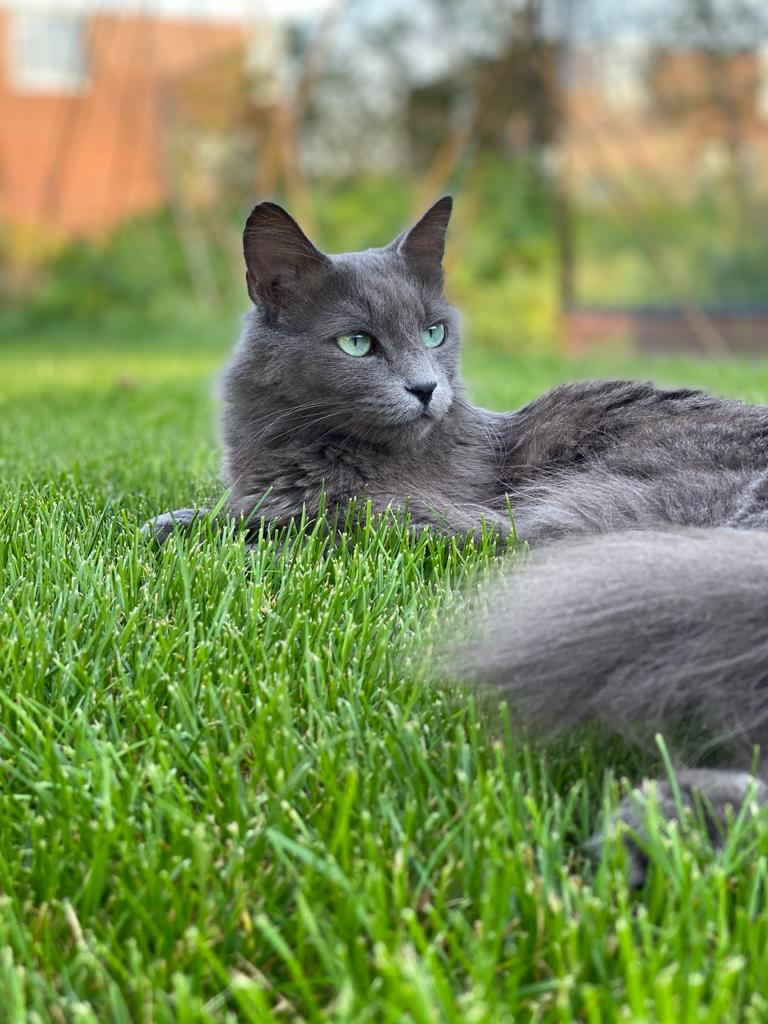